effigies & familiars
sticks and stones from the darkness
tamessa & z’ev 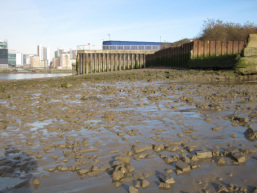 but one view of the gathering grounds click to enlarge
I had some brief inner contact with the consciousness of the river Thames many years ago while visiting London
and you are the first person I have come across who is talking with her. It is an honour to come across your work.
Josephine McCarthy
on the 26th september 2010 i visited the river and thames and spent a few hours there
towards the end of that time i was walking well down to the water line and came upon 3 pieces of wood and 3 of metal
i took them back to anstey road and assembled them into an initial configuration in the garden click to enlarge
a few days later I left for two months of my annual fall season of performances
during this trip I had constant thoughts about my relationship to the thames with regards to developing a project around the general notion of ‘sticks and stones’
and
the specific notion that this project would be a collaboration with tamessa, the ancient celtic personification of the elemental energies of the river
and
as her name, tamessa, is compared to other cognates such as middle irish teimen = dark grey and welsh tywyll = dark, and a pre-celtic indo-european root tã- = melt (hence muddy), i didnt think it was going too far to translate it
as the darkness for use in the project title
regarding the evolution of the project:
while the title sticks and stones had come into my mind from the very beginning,
it was not until the summer of 2010 that stones began to be gathered in any appreciable amount
at which point
the use of stones for ‘setting’ both sitcks and stones was able to eventually arise
and
it was only in october 2010 that the distinctions of effigies and familiars became associated with,
respectfully, sticks and stones

that is, for the most part, sticks are effigies and stones are familiars
and so as far as im concerned in clarifying this distinction:
effigies are representations of mythic thought-forms
familiars are anthropo/zoo- morphic concretizations of elemental energies

put another way:
effigies are lenses for focusing on/the focusing of mythic powers
familiars are objects of subjective power(s) in-and-of themselves